Welcome to our store

(Big eat small) Tic-tac-toe game, can you play it? 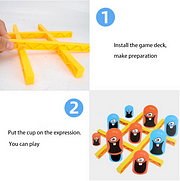 1.Pre-match preparation: Each player chooses a cup of one color and presses the smallest to largest Set them together in sequence (3 sets for each player), and only 3 large ones are exposed. While playing Only go to the outer cup.

2.Goal: Arrange your cups in a line.

(1) In order, the player can put a new cup on the stage and send it to any plate Space to move your own cup. Use the big cup on your own plate to put on a small cup (small The cup can be your own or opponent's).

(2) The newly placed cup must be placed in the space on the plate, unless the other party already has three cups Form a straight line, in this case, you can use a new cup outside the plate to cover these three One of the cups.

4. Game over: The player who arranges his cups in a line first wins. A line in a row can be horizontal, vertical, or diagonal.

Have you learned it?

As this product has more accessories, some parts/accessories are smaller, children under 3 years old Not suitable for playing, children over 3 years old need to play under the supervision of their parents to avoid choking danger. 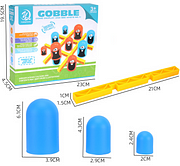 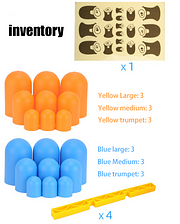 From home good products to beauty and health gear, to clothing and electronics, you can find a wide variety of goodies that will inspire you to live your best life. And if you don’t want to leave out your furry friends, we even have a section of innovative products devoted just to them too.

Join our email list for exclusive offers and the latest news.